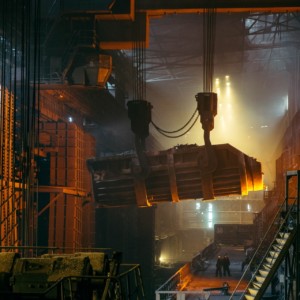 Cambridge Econometrics recently worked with the Cambridge Institute for Sustainability Leadership to look at the effect of climate neutrality on jobs and skills in Europe. As part of this effort FTT:Steel, a recently developed novel sub-module of CE’s E3ME model, has been used to assess the impacts of the decarbonisation on the steel industry. Here we present an excerpt of the recently published report “Technology, employment, and climate change mitigation: Modelling the iron and steel industry”.

Steel industry – an important cog in the machine, with intensive emissions

Steel – an alloy of iron and carbon – is used widely in almost all industries from construction to domestic appliances and many of the renewable energy technologies, with a growing trend around the globe. The steel industry is of high importance to the EU and global economies, some 9 per cent of global steel production takes place in the EU, where the iron and steel industry ranks as the fourth largest industrial sector and a major employer. In 2019, the EU steel industry generated 330,000 direct jobs across 23 member states, with induced and indirect jobs added total contribution of the industry can reach 2.67 million jobs. While in itself it is not among the biggest contributors to GDP and employment in the EU, it does provides inputs to value chains for most other sectors – making it an important long-term objective to retain at least some degree of steel production within the EU.

However, steel production is emissions intensive: in 2016, the iron and steel industry was responsible for 5 per cent of the CO2 emissions produced across the EU. At present, steel is produced primarily through two methods: the blast furnace (BF-BOF), which uses iron ores and recycled steel as inputs and burns coal as the main energy input, and the electric arc furnace (EAF), which uses mainly recycled steel as inputs and uses electricity as the main energy input. The BF production method is currently the only widely used technology for so-called virgin steel production, while the EAF method can be used to produce steel solely from recycled steel scrap. By using renewable or other low carbon electricity, the CO2 emissions from steel production using EAF can be reduced to very low levels.

Using the steel industry as an example, the case studies in the briefing illustrate how such analysis can be carried out using macroeconomic modelling tools. Cambridge Econometrics uses the Future Technology Transformations (FTT) framework to simulate technology take-up in the steel industry. In this framework, the decision-making of investing agents is mimicked: investing agents are heterogeneous due to different perceptions of costs, imperfect foresight and knowledge, and different valuation of the future. Local characteristics add to the overall uncertainty. Prior to choosing to invest in a particular technology, investors assess the expected costs and benefits. Several cost categories may be affected by policies and the external economic environment (e.g. fuel prices, demand for steel, etc.). An estimate of investor preference is obtained by comparing the balances between all potential technology pairs.

However, uptake of new technologies does not depend solely on preferences, but also on the rate at which old technologies are eligible for replacement and certain sectoral constraints. In the iron and steel industry, one such constraint is the availability of steel scrap: once the supply of available scrap has been exhausted, take-up of the recycling mode is restricted. FTT:Steel uses an endogenous approach to estimating scrap availability, building on historical steel flows and estimates on product lifetime, based on the work of Pauliuk et al. (2013). The scrap supply is traded across regions and then over technologies. Most modes of production can substitute at least a certain degree of their virgin material input by scrap, but scrap input is favoured to flow into the recycling dedicated production mode.

A change in the technology mix of the steel industry can have several economic impacts. First, as the technology mix changes, so does the demand for raw materials and energy carriers, which affects the supplying sectors. Second, steel prices might be influenced by policies and changing raw material prices, affecting the demand. Third, different technologies require different preprocessing of raw materials, with implications on employment. For example, steel recycling requires the least amount of employment as no pre-processing of raw materials is necessary. As a result, a change in the technology mix induces a change in employment, which may impact consumer expenditure through disposable income of the population. All of these changes are due to bidirectional feedback between FTT:Steel and E3ME. For a more detailed overview of E3ME, see Mercure et al. (2018) or the E3ME model manual.

The steel industry in a low-carbon World, the EU top-5 case study

Here we present findings from one of the case studies focusing on the EU Top-5 producers, you can read the other case study, focusing on Sweden’s steel industry and further details in the report here.

To assess the effects of a low-carbon transition on the steel industry a mitigation scenario was constructed to support low carbon steel technologies and at the same time penalise carbon-intensive technologies. The mitigation scenario comprises an economy-wide carbon tax, subsidies on capital investment for low carbon technologies in the steel and power sectors, subsidies on electricity and hydrogen consumption within the steel sector, and a phaseout regulation of carbon-intensive technologies in the steel and power sectors (see Table 1). Mitigation policies are likely to extend to other sectors, such as the power sector, through which they influence the price of electricity, which is an input for the recycling production mode.

Using E3ME–FTT:Steel to simulate the economic environment and change in mode of steel production, potential trade-offs between environment and economy can also be analysed for the EU top steel-producing countries. When a baseline scenario (no additional policies) is compared to a mitigation scenario for the whole EU, potential effects can be better estimated.

Comparing the development of the steel sector between the two scenarios in the top five steel producing countries in the EU – Germany, France, Spain, Italy and Poland – the introduction of mitigation policies results in hydrogen-based steelmaking becoming much more prominent than carbon-based steelmaking in all countries, albeit to varying degrees. The support policies also lead to a situation where the hydrogen-based production mode can compete with the recycling production mode: in countries such as Poland, France and Germany, the hydrogen-based mode of production increases at the expense of steel recycling. Figure 1: Breakdown of steel production (2050) for the baseline and mitigation scenarios

In the ‘mitigation’ scenario, two main effects come into play that alter employment levels for the top EU producers. Employment levels are affected by changes in the technology mix within the iron and steel industry (as discussed previously), and changes in total domestic steel output. The latter can be affected by a change in regional competitiveness, which drives imports and exports. As shown in Figure 2, the analysis for Germany and Italy shows an initial increase in employment compared to the baseline scenario. The driver behind this is a slight increase in production levels, which compensates for a decrease in employment due to a change in the production mode. Towards the end of the simulation, employment in Germany drops compared to the baseline as slightly less labour-intensive hydrogen-based production reduces the share of carbon-based production more than it does recycling-based production, thereby outweighing the slight increase in production levels. A similar explanation applies to France and Poland, albeit France will slightly lose output levels while Poland remains roughly on par. The observed increase of employment in Poland in mid-simulation is due to the hydrogen-based production mode substituting the less labour-intensive recycling production mode. Figure 2: Percentage difference of the mitigation scenario compared to the baseline scenario for employment

The Italian iron and steel industry is already largely recycling focused and therefore benefits employment-wise from a slight substitution to hydrogen-based production (hydrogen-based production being slightly more labour-intensive than recycling-based production). A similar explanation applies to the Spanish case. In the ‘baseline’ scenario, Germany, France and Poland retain a sizeable (30–40 per cent) carbon-based steel production in the mix (left side of Figure 1). A phase-out thereof in the ‘mitigation’ scenario ultimately leads to employment losses at similar output levels.

The amount of scrap steel that is needed in recycling-based production is subject to global demand, meaning that if a major producer such as China was to implement policies that  incentivise greater transitioning to a recycling-based approach, growing competition over available scrap steel could further constrain the recycling-based approach in Europe. Once this constraint is reached, take-up of the recycling mode is restricted, creating a market gap for other production modes that are not limited by scrap availability. The impacts of greater competition for scrap steel at the global level has not been implemented in these scenarios, but could be if the model was run at a global level.

While the effect of the simulated policies has varying effects on employment levels, the policies are likely to be successful in promoting low carbon steelmaking and, as a result, reducing the carbon footprint of the steel industry. Emissions for each of the top-producing EU nations decrease by 60 to 70 per cent (Figure 3). It is noteworthy that absolute emissions are already comparatively lower in Spain and Italy due to a dominant position of steel recycling in the ‘baseline’. Figure 3: Percentage difference of the mitigation scenario compared to the baseline scenario for CO2 emissions

Note: Spikes in the emissions graph are caused by shortages of steel scrap, which requires more carbon-intensive inputs.

Successful decarbonising in the steel sector is possible, but some employment losses can be expected

In these case studies we implement policies to promote hydrogen-based production and steel recycling through subsidies of capital investment and the related low-carbon energy carriers. In addition, a phase-out regulation is put in place to create a market gap for low-carbon production modes. Since a steel specific policy portfolio is unlikely, we implemented decarbonisation policies for other sectors as well. We compare our results to a baseline scenario where no climate mitigation policies are enacted.

While the decarbonisation policies are definitely successful at reducing emissions (by 60-75 per cent compared to the baseline in 2050 across case-studies and countries), our results show that effects on employment levels in the steel sector would see negative effects (a 2-3 per cent reduction in employment for the steel sector). The wider economic impacts were excluded from this brief and simple analysis. This means that job creation in for example the hydrogen supply sector is not taken into account. Nor the additional employment needs in the power sector to meet the increased electricity demand. Such issues and many more can be investigated using E3ME–FTT framework.

Details and the other case study can be read in the report here.
Cover image is by Ant Rozetsky.